Within the UN Reform launched by the UN Secretary-General Antonio Guterres in early 2019, the UN Resident Coordinator Office is in charge of following responsibilities:

Supported by the Office of the High Commissioner for Human Rights in Geneva, a Human Rights Adviser operates as an integral part of the UN RCO in Montenegro. She provides support to the Resident Coordinator and the UNCT, but also national stakeholders including Government, civil society organisations and national human rights institutions.

The UN Resident Coordinator in Montenegro

Peter Lundberg of Sweden serves as the UN Resident Coordinator to Montenegro as of 1 January 2021. Previously, he served as the Regional Head for Development Cooperation for Middle East and North Africa at the Swedish Embassy in Amman, and before that he worked as the United Nations Deputy Humanitarian Coordinator of Nigeria, responding to the Lake Chad Crisis in northeastern parts of the country.

Mr. Lundberg has devoted more than 25 years to public, diplomatic, humanitarian and development service. Prior to joining the UN System in 2016, he worked with the Swedish government and with non-government organizations i.e. the Red Cross and Red Crescent movement in Ethiopia, Palestine, Zimbabwe, Malaysia, Jordan and several other countries focusing on planning and delivering services to people. 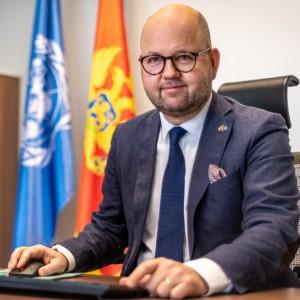